The other day, my beloved roommate told me that she spent an eight-hour daytime layover holed up in Miami International Airport. A quick Google search reveals that the $2 Miami Flyer bus goes express to Miami Beach from the airport in less than half an hour. That’s ~5 hours she could have spent lounging by the sea instead of lounging in a terminal. Don’t let this be you.

A lot of people either aren’t even aware that you can leave the airport during long layovers, or else they’re too afraid to risk it, even if that means trying to pass many hours between flights reading tabloids at a departure gate rather than out exploring. In reality, though, long layovers are an amazing opportunity to get a glimpse of a new place, even if it is only for a few hours. If you’re anything like me and you love the feeling of ticking a new country off your travel list, a long layover is the perfect chance to get your feet on the ground in a foreign city before you head off to whatever else you’re going, giving you two trips for the price of one.

At this point, I actively seek out 7+ hour layovers when booking my flights so that I have time to clear immigration and leave the airport to get in a few hours of sightseeing wherever I am. This is pretty easy to do on sites like Student Universe and Expedia (my two preferred booking platforms), which will give you multiple combinations of flights and layovers on a given airline so that you can choose the one you want. You might need to do a bit of digging, but long layover options for any destination are almost always there, and are absolutely worth taking advantage of once you find them.

On my way to Hong Kong for New Years this past December I scheduled an 8.5-hour layover in Taipei, which gave me a few hours to get out and see some of Taiwan for the first time. I’m so glad I did, and I want other people to be able to do that, too, without worrying about the risks of missing a connecting flight or getting lost in an unfamiliar city. With that in mind, here’s a list of tips to remember if you’re planning to leave the airport during a long layover, so that you can make the most of your time without any added stress.

Chiang Kai-shek Memorial Hall! Beneath this is a museum dedicated to Chiang Kai-shek’s life, which is super interesting and definitely worth a visit.

This was supposed to be a photo of the entire square, but unfortunately they’ve got an obnoxious Disney Frozen tent up in the middle of it. A month later and I still can’t Let it Go.

When booking a flight with a long layover, it’s definitely important to check the time of day you’d be arriving and leaving the transit city. Obviously it wouldn’t make sense to have a long layover that is only at night—however, that doesn’t mean that you should count out overnight layovers altogether. Many overnight options are long enough to give you some daytime hours to sightsee, too.

In May 2014, I had a 19-hour layover in Madrid on my way back home from Barcelona. The flight from Barcelona landed around 10PM, and the flight to New York left at around 5PM the following day. I found a cheap hostel in the city center to spend the night, and then woke up at 8AM, refreshed and ready to see as much of Madrid as possible before 2PM, when I’d have to head to the airport for my next flight. This was more than enough time to see the city’s main sights (Gran Via, Plaza Mayor, The Royal Palace, Plaza di Cibeles, Puerta de Alcalá, etc), even when you factor in the whirlwind 30 minutes in which I had my phone stolen by a couple of ten-year-old kids, watched cops chase them down and take it back, and then got escorted to a Madrid police precinct to have it returned to me… but I made it back to the airport, phone in hand, with plenty of time to spare.

But it’s also perfectly fine to save that money, sleep in the airport overnight, and then head out into the city the next morning. That’s what I did this past summer, on an overnight layover in Milan on my way back from Greece. Our flight from Santorini landed at 2AM, so we just slept in the baggage claim for a few hours before heading out into the city to sightsee at 7AM, back with plenty of time for our 2:30PM flight. Yes, sleeping on chairs in the airport is uncomfortable, but it’s often worth the money saved—if you’re thinking about crashing in an airport on a layover but you’re concerned about comfort and safety, I recommend checking out http://www.sleepinginairports.net. If you search for the airport you’ll be laying over in, you’ll get an extensive guide about the airport’s facilities and amenities for overnight layovers (are there showers? Wifi? Lounges? Luggage storage for my carry-ons?) along with reviews by people who have slept in that particular airport before, full of tips on which terminal to sleep in, which benches or seats are the best, and whether or not security personnel are strict about sleepers. Yes, a website like this actually exists.

The famous Milan Galleria! Our layover was during Expo Milano, and while we didn’t have time to go to the fairgrounds, the international atmosphere in the city was really cool. 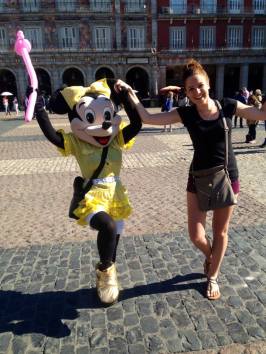 Dancing with Minnie in Plaza Mayor, Madrid! Not a bad way to spend a layover.

This is something you should do before you travel internationally anywhere, but it’s easy to forget to take this into account when planning a layover. With a US, Canadian, or EU passport, you rarely need a visa in the most popular transit countries; with other passports, sometimes it gets more difficult. Luckily, a lot of countries relax their visa requirements specifically for transiting passengers who wish to leave the airport and sightsee. China is a great example. When I spent two weeks in Beijing in 2014, I needed to apply for a $140 visa. Next month, though, I’ve got a nine-hour layover in Shanghai on my way to Seoul, and even though I’ll be leaving the airport I don’t need a visa, because China has a 72-hour visa-free transit option in place in most of its major cities, including Beijing, Shanghai, and Guangzhou. This applies to nationals of a large number of countries in Asia, Oceania, Europe, and North and South America—check this link for more info, and to see if your nationality is included.

A Google search of “transit visa {insert country here}” should reveal everything you need to know. Remember, though, if you don’t need a visa to visit a country as a regular tourist, you definitely won’t need one for a day-long transit.

Not a layover, but pictures from my last trip to mainland China in 2014! Excited to go back in a month to see Shanghai, even if it is only for a few hours.

Too bad Shanghai is too far from the Great Wall…

The airport’s proximity to the city can make or break a long layover. It’s important to give yourself enough time to get back before your next flight, so airports that are relatively close to the cities they serve are the best places to take extended layovers. Do some research on transport from the airport to the city beforehand; most airport websites have a page entirely devoted to this. I recommend going with trains wherever possible, since they’re safe, fast, and reliable. You can almost always count on a train to get you back to the airport at its predicted time, since trains aren’t subject to traffic and are very rarely delayed because of weather. Luckily, most airports nowadays offer a rail or subway link to their cities; Shanghai, for instance, has a high-speed maglev train that gets you into the city from Pudong in 8 minutes flat.

That being said, some airports won’t have train links, or in some cases the trains will be too expensive to fit your budget. It’s still okay to leave these airports using other means, but just make sure you give yourself plenty of time to get back so that you can account for traffic. Taoyuan Airport doesn’t have a direct train link yet, so we took a 45-minute bus ride to get into Taipei to sightsee and it worked out pretty well. As long as you know your options, you’ll be able to choose the fastest, most economically efficient way to get into the city and back with time to spare.

The walk to Milano Centrale, the station where we took our train back to the airport! International flags lined the street for the World Expo 2015, which happened in Milan from May to October.

If we hadn’t left the airport in Madrid, we wouldn’t have been able to see beautiful buildings like this.

This one is so important. If you only have a few hours to see a city, you don’t want to waste any of that time figuring out what to do. If it’s an international layover, my rule of thumb is to give yourself 1.5 hours from landing to deplane, clear immigration, store your bags, and withdraw some local currency at an ATM. This is an overestimate; it rarely takes this long, and immigration might be a total breeze. Then, taking into account how long it takes to get to/from the city, figure out which tourist attractions to prioritize. If you Google “Eight hours in Taipei”, “Six hours in Berlin,” or wherever it is you’re taking a layover, you’ll find a lot of suggestions from locals and frequent travelers about how to spend your time. I recommend using TripAdvisor; there’s so much information within the city and country forums, and I’ve made posts there before requesting advice for long layovers and gotten awesome suggestions in response. Finally, head back to the airport with at least 2.5 hours to spare before your flight. You’ll have to go through security again just like any departing passenger, so you want to be sure you have enough time to do that.

It’s important, of course, to be flexible with whatever schedule you make, because air travel is hugely unpredictable. We originally had planned to do more in Taipei, but when our flight landed half an hour late and we saw the long lines at immigration, we knew we would have to cut some things out. If that happens, choose what’s most important from your list and head straight there—in our case, we chose to focus on Chiang Kai-shek Memorial Hall, rather than additionally trying to make it downtown to see Taipei 101 or hike Elephant Mountain for the views. This was the best decision; even if you don’t make it to everything you want to see, a layover is a good chance to briefly sample a city and determine whether you want to return in the future to see more! 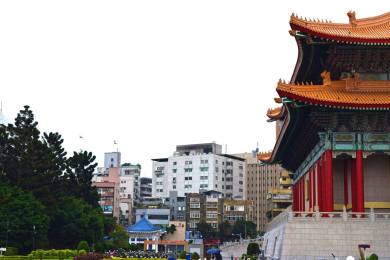 With these four key things in mind it’s really easy to plan and enjoy a long layover, an added bonus to whatever awesome trip you’re already taking. Yes, it takes research, but the end result—amazing memories of a fast-paced morning in a city, or even just that “two hours in Taipei” instagram caption—makes it so worth it. I have lots of other tips to offer on this subject, too; I’m an obsessive trip planner and my friends’ designated travel agent, so I’d be happy to answer any questions you may have or help you plan a layover, even if it’s in a city I’ve never been to. Let me know!

4 thoughts on “How to Plan a Long Layover”